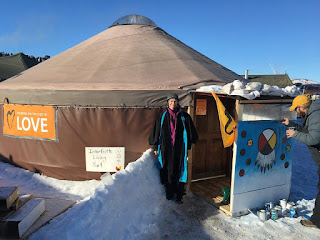 The Interfaith Prayer Service took the shape of many, many roughly concentric circles around the sacred fire. The elders sat under a small three-sided structure along with a huge drum. Once the ceremony was begun, speakers were invited to come forward. I want you to know that, once again Rev Karen Van Fossan and her congregation were honored in a significant way. She was one of the first speakers. She prayed and then 4 of us sang “Down to the River to Pray”.

The only reason I was among the singers is that I was invited to ride down with Karen, Andrea - a member of the choir, and Liz Anderson who has been right up there from the beginning as one of the primary organizers of this ministry. They were rehearsing the song in the car. I was invited to sing along, so I did. This is how things work here. Spontaneous invitation, gracious welcome.

As we sang this lovely old song, hundreds of people around and in front of us were silent until a few voices rose to join. I heard two male voices behind me and lifted the music for them to see. Well, one of them was Cornell West. Another a native vet. Sharing music with them and with these 3 women felt like an overwhelming, unearned gift. Throughout the day people approached to thank us, hand to their hearts. All I could do was bow my head. The song served as the gift of prayer Karen VF hoped it would be.

The service itself featured story-telling and prayer song in many languages. Teachings, testimonials, and more prayer. Many commented on the unique feeling of unity. Many thanked the youth and elders who began this movement with a run to Washington DC to ask President Obama to protect the water, and the elders and Spirits who insisted that the Water Protectors be non-violent.

You have the news that the Army Corp of Engineers has denied the easement for DAPL to put the pipeline under the water. We heard after the Interfaith Prayer Service, after the news was checked and cross-checked. The headlines use the phrase that camp “erupted”. It did.

Immediately we were engulfed in piercing cries and ululation that feel to me something like an electric pulse that flows from below our feet right up through our bodies and out of our mouths. There were stunned looks on faces – I am sure that was so for mine. There were long hugs and weeping. Flags and banners and sacred staffs were rocking and rising through the air. Great quantities of sage were suddenly billowing everywhere, blessing everyone and thanking the Sacred. Questions rose about whether President Elect Trump would be able to reverse this. It was announced that Barbara Boxer will introduce a bill to require consultation? permission? from native nations before doing any construction.

There is a great sense of victory and relief among the Water Protectors and supporters. There is a sober sense that this is one victory with many struggles ahead. But it was time to dance. Drumming and dancing broke out everywhere. There will be a victory celebration on Tuesday evening (don’t know if the 2-day storm will affect that). And I know the leaders are planning about the camps as we speak.

Subzero temps are immanent. For now, people are focused on making sure those who remain at camp are warm, fed and secured for the winter. The vets – thousands of them – will help make this happen.

Some of the leaders and families will go home for the holidays. Many people will stay to keep the camp functional as longer-term decisions get made.

I can say with all my heart that I completely trust the wisdom of the decision makers to choose next steps that will guide this new era of organizing across nations, races and cultures for earth and for justice.