Rev. Meredith Garmon
America did not invent prejudice, or discrimination against people that, in any physical way including skin color, looked different. But we did invent the modern conception of race, and the racism based upon that conception.

The word “race” used to mean any other group of people. If you lived in northern France, the people a couple hundred miles south of you were a southerly race. Protestants referred to the Catholic race, and vice-versa. Nobles spoke of the peasant race. The emergence of the modern sense of race was a deliberate device of the wealthy landowners in the colonies in the 1600s.

Much of the manual agricultural labor of the colonies, at first was done by indentured servants that we would now call white. England’s anti-poverty program of the time was to deport their poor to America essentially as slaves, but with the provision for earning one’s freedom after 10 or 20 or sometimes as much as 30 years of labor. From what we can tell, when African slaves began showing up to work beside them in the field, the darker skin color aroused no animosity. Whether you had paler skin or darker skin, you were kept in separate quarters, supervised by an overseer, whipped as a means of “correction,” often underfed and underclothed, and stereotyped as vile and brutish and subhuman. 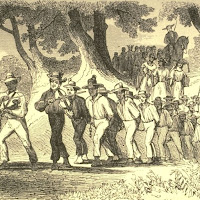 The two groups, both despised objects of the contempt of the bourgeoisie, saw each other as sharing the same predicament.


“It was common, for example, for servants and slaves to run away together, steal hogs together, get drunk together. It was not uncommon for them to make love together.” (Edmund Morgan, American Slavery, American Freedom: The Ordeal of Colonial Virginia, 1975, p. 327)

And sometimes European servants combined with African slaves to rebel against the ruling elite.

From the point of view of the masters, the workers that came from Africa cost more than the indentured servant workers from Europe, but they paid off in the long run because they didn’t have to be released after a certain period of time – and, as an additional bonus, the master also owned their children. For these reasons, African slaves were in demand, and the population of them increased through the late 1600s.

The increased numbers of African slaves combined with growing numbers European-born poor freedmen who had served out their time as indentured servants. The formerly indentured freedmen typically had no house or land. They were rankled by unfair taxes, by the greed of legislators who then, as now, were in the pockets of the wealthy, and by land use regulations that made it very difficult for them to ever own land. Freedmen with “disappointed hopes” and slaves of “desperate hope” were joining forces to mount ever more virulent rebellions (Thandeka, Learning to Be White 45).

Only then did the masters begin to draw the sort of race line that today is so familiar to us. They did it as a strategy against these rebellions. The new way of grouping people encouraged the European-born part of the rabble to think of themselves as “white” – as sharing something crucial with the landowners which the African-born did not. Thus the freedmen were co-opted into betraying their own economic self-interest to support the landowners’ interests with which they identified by virtue of their shared whiteness. It was a brilliant divide-and-keep-conquered strategy

The landowners’ strategy invented American racism as we know it.

The trick was accomplished by such means as passing new laws offering some protections to whites even while still indentured. As of 1705 in Virginia, any negro slave could be given 30 lashes on the bare back, but it was forbidden to whip a Christian white servant naked. The whipping happened, but the extra indignity did not – which helped the indentured begin to learn to be white, to identify with their oppressors against the even more oppressed. That same year, 1705, horses, cattle, and hogs were confiscated from slaves and sold to benefit poor whites. Any white was given the right to whip a black servant or slave. Slave owners were urged to bar their black slaves from learning the skills of a trade in order to preserve that work for white artisans.

In ways subtle and obvious, a dignity based on whiteness alone was created where nothing of the sort had been imagined 50 years before


“The gap between the wealthy and poor widened as a result of slave productivity. Thus the sense that poor whites now shared status and dignity with their social betters was largely illusory.” (Thandeka, Learning to Be White 47)

But that illusion was powerful. Being white meant despising blacks, which afforded this illusory dignity that kept poor whites from agitating for economic reform on their own behalf. Instead, poor whites adopted attitudes and behaviors to assist the landowners in keeping the blacks down.

We carry that legacy today.

I was a timid first-grader in North Carolina when one-day, on the school bus, a big third-grader asked me if I liked President Johnson. And I shrugged. And the big kid said he didn’t like Johnson ‘cause he lets – and here he used the N word – go to our school. The look of contempt upon his face made me feel such a relief to not be the object of that contempt. I learned to be white on that day. I was whited by a system invented in this country two and a half centuries before by landowners who wanted to suppress rebellion, a system that took on a life of its own and long outlived its original purpose.