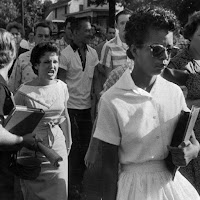 America began with class division -- wealthy land-owners and oppressed poor -- largely imported from Europe. The American innovation was divide the lower class against itself by dividing it along racial lines. Poor whites were told they were better than blacks, while also told they unworthy of any better station in life.

The more whites were made to feel unworthy, the more they projected unworthy qualities on the group they were allowed to, and told to, despise. The more whites internalized that message, “You’re white, so if you just work hard enough, you’re bound to be OK,” the more they projected upon blacks the laziness they feared in themselves. White racism against blacks is always a version of self-disgust adopted in a desperate attempt to hold onto worth and dignity in the face of exclusion from the upper classes.

This begins to explain a few mysteries.

Martin Luther King brought his war on slums to Chicago for his 1966 campaign for open housing. He encountered greater hostility than he had ever seen. Rocks and bricks were thrown.


As King marched, someone hurled a stone. It struck King on the head. Stunned, he fell to one knee. He stayed on the ground for several seconds. As he rose, aides and bodyguards surrounded him to protect him from the rocks, bottles and firecrackers that rained down on the demonstrators. King was one of 30 people who were injured; the disturbance resulted in 40 arrests. He later explained why he put himself at risk: "I have to do this--to expose myself--to bring this hate into the open." He had done that before, but Chicago was different. "I have seen many demonstrations in the South, but I have never seen anything so hostile and so hateful as I've seen here today," he said. (Chicago Tribune, CLICK HERE)

What could account for this intensity of hostility from whites whose every economically-visible interest was unthreatened? Why were the lower and middle-class whites more virulently racist than the upper-class whose interests were more directly challenged?

Because if worth and dignity didn’t come from whiteness, they just weren’t sure where it could come from. 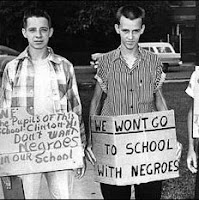 Over and over, a substantial portion of white lower and middle-class voters vote against their own self-interest and in favor of wealthy interests. That doesn’t happen in most other countries in the world. Why does it happen here?

Because here is where the idea of being white -- that is, learning to distance yourself from the interests blacks would have – even if, in reality, you did share those interests – was invented. "White" has meant identifying with the wealthy, identifying with a shared paleness over and against shared economic needs.

Why is the US unable to enact a fairer, much more effective, and even cheaper health-care system – a single-payer government National Health Insurance – while Europe and Canada and Japan have this eminently sensible system?

Because the US's specific heritage of racism taught us to identify with the wealthy, and the wealthy don't need national health insurance.

Why is the US unable to provide adequate public schooling, affordable housing for all, and progressive taxation?

Because the US's specific heritage of racism taught us to identify with the wealthy, and the wealthy send their kids to private schools, aren't at risk of homelessness, and don't want to be progressively taxed.

Why is it that when Black men open-carried firearms as the Black Panthers did in the 1960s and 70s, gun control legislation passed, and when that perceived threat was gone and whites wanted to open carry, those controls were rolled back, and white people heavily armed in public are celebrated as patriotic and freedom loving?

Because the national psyche has developed the longstanding habit of projecting upon dark skin color everything it is scared of, and is unconsciously convinced that black people doing a dangerous activity is much, much more dangerous than white people doing the same thing. 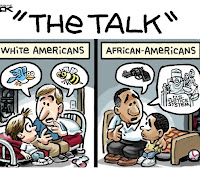 Why is it that a young black male is 21 times more likely to be shot by police than his white counterpart?

Why is it that black renters learn about 11 percent fewer rental units and black homebuyers are shown about one-fifth fewer homes?

Why is it that blacks and whites use illegal drugs at the same rate, but African Americans are arrested on drug charges at a three times higher rate?

I think it's pretty clear why.

* * *
See also
Origins of American Racism
Posted by Rev. Meredith Garmon at 2:09 AM