A Memory of Privilege and The Importance of Personhood

I’m fairly certain that everyone at some point has locked themselves out of a car. Well, two years ago, working at the First Unitarian Church of Cleveland, I went to a local store and locked myself out of my parent’s car. I stood looking through the windows at the keys, and had no idea what to do. I shook my memory of what my parents told me, went inside the store and asked for the local police department number. I called the police and explained I was locked out of my car and needed help. Within twenty minutes, they arrived. I smiled and shrugged my shoulders as we laughed about the mistake, and the policeman jimmied the car and got the door unlocked. We exchanged pleasantries, and I left.

Online later, I was explaining this to my black girlfriend Ashley, and she was shocked. “You did, WHAT?”
“Yeah, I just called the police. They came over and helped. They were really nice about it.”
“That would never happen.”
“Well what would you do?”
“Call AAA. But never call the police. A black woman outside of a locked car, trying to get in? I would get arrested.”

I was stunned silent, slowly realizing how truly she spoke. I thought back about the scene. I was in Beechwood, a suburb of East Cleveland that had a large black population. I just happened to be white. But just happening to be white, made a huge difference. I was never asked for my ID, or my driver’s license which I had on me. If they had researched the license number, they would have seen the title in is my parent's name and not mine, something that could have easily been suspicious if I was taken as someone not to be trusted. But I was trusted, because I didn’t appear as someone who was scary. I wasn’t threatening, because I was white.

Even more stunning, was the realization that it never occurred to me that it could be a bad idea to call the police. Growing up in a small town, I had been locked out of my parent’s car before. And my parents told me to always call the police. My parents taught me to trust the police, and that they would always help me. When I got locked out of my car, I had known about the national political discourse surrounding police brutality. I knew that when it came to larger events like murders or violence, that police should be questioned. But this was just getting locked out of a car? Why would anyone have trouble with the police with something as routine as this? 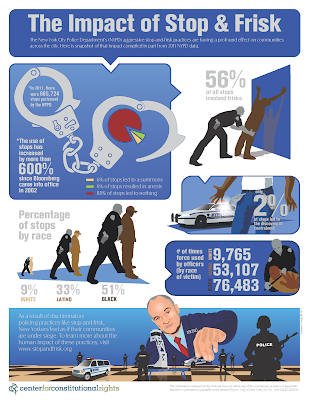 Having grown up with the perspective that no one should have trouble with the police about a minor thing like getting locked out of a car, is one of the clearest examples I have experienced about my own white privilege. People of color routinely experience themselves being read as threats, no matter the context. It could be something as small as giving a ticket in to see a movie or theater performance, riding a train or plane, driving their own car to work, or better yet walking. Those living in New York City know about the realities of Stop and Frisk, a policy to prevent the use and selling of drugs that has policemen stop people and frisk them for illegal substances. In practice, it means stopping people of color randomly on the street and frisking them, usually without their permission, and arresting them if there is any resistance. The countless numbers of stories of those who have been forcibly stopped, fondled, and arrested just for walking down the street in their own skin is unimaginable. It doesn’t matter how minor the action is, in wider society people of color are seen as threats and not people. And my experience as a person with white privilege had me grow up in a white bubble that made it so I didn’t see that reality for years, where I just trusted that everyone would be seen as people. Being Unitarian Universalist, and believing that everyone everywhere is first and foremost holy and sacred, means that I am called to continually unpack the perspectives of my white privilege so I can clearly see everything in this life that limits the humanity of others. This is why saying "Black Lives Matter," matters. If we really believe that everyone has value and every life is holy, then we cannot be complacent in the illusion that our societies and systems treats everyone the same. We live in a world that does not treat everyone with the same sense of instinctual trust and respect as I receive by being white. Therefore, I must say black lives matter and work for a world that gives them the respect and trust they deserve on first glance.

In order to truly work for a world that gives everyone their holy respect, my faith calls me to constantly unpack my white privilege. Unpacking racial privilege for me, means consistently challenging my assumptions, making and quickly learning from my mistakes, and listening without defensiveness or interjection to the needs and realities of oppressed peoples. I know that this example is only a very small example of the privileges of being white, but it helps point to the larger reality of an unjust world we are called to change. May this memory help you to reflect on your own experiences of privilege, so that we together can work to uncover injustice and build a more just and loving world.