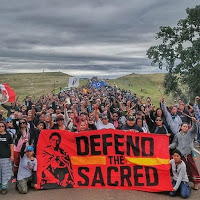 I have not gotten to the training to be part of the group of volunteers providing emotional support to those who have been demoralized or traumatized. I intended to get to the scheduled training a couple days ago but woke up feeling my own despair which was leading me to a sense of panic. So I stayed put, called a sister to cry (thank you), took a bit of time off to relax and pray. Then requests for transport and purchasing and all that started coming and I was on my way. I hope to get to that training soon to provide a shoulder for others.

Because there are many things to demoralize. In addition to the obvious violence, some of which has made headlines, there are the smaller acts of violence.
So, after demoralization is love. Even during demoralization is love. One young man said to me that he is finally for the first time in his life letting himself let go of control, along with the expectations that he has to fix everything, or can. He can only do that because his cohorts and fellow Water Protectors are calling him out when he tries to control, and they still love him through it.

Everything that people need to live at camp is given freely, without cost. There is an abiding sense of belonging, caring, kindness. Love. The expectations are that we will all be as generous as possible and that we will take no more than is needed. Sometimes locks are needed, but rarely. Everyone at camp is expected to get training in how things work, in basic racism awareness, and beyond training, to work. Chopping wood, digging trenches, cooking, doing art for the camp, cleaning outhouses, hauling, providing security, teaching the children, caring for the sick, building and winterizing structures, standing in resistance, on and on. And all day, every day there is a central fire at which, I think most of the time, a chief presides who is chatting, telling jokes, chanting, making announcements, delivering decisions. Including. 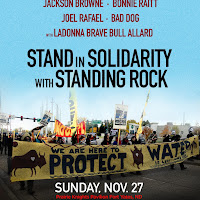 Last night's concert with Native Chiefs, Bonnie Raitt, Jackson Browne, John Trudell's Bad Dog, Joel Rafael and Jason Mraz was as powerful a healing service as I have ever attended. The music included invocation of all that is sacred. The musicians evoked our highest intentions of protecting the people and land. They boldly helped us express anger, grief, triumph and peace. Love was all pervasive and healing.

Oh, there are so many many ways to love.
Posted by Unknown at 11:31 AM