On Statues and Statutes, Part 1 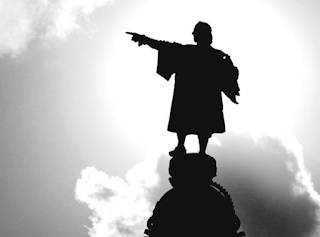 Columbus Day – Indigenous Peoples' Day. What’s all the fuss about? What’s up with the round-the-clock police presence at Columbus Circle in New York City and the guarding of the 70-foot granite column and statue of Christopher Columbus that stands there?

As debate and the toppling of Confederate monuments has filled our news, so too has a reassessment of Columbus’ place of honor in American history. Meanwhile, the fate of the more than 100 statues of Columbus across the country hangs in the balance.

As the Denver Post reports, statues from California to Minnesota have recently faced vandalism or removal. In New York last month, the Columbus Circle monument was vandalized with pink nail polish, symbolizing the blood on Columbus’s hands. And, not far away in Central Park, a seven-foot tall statue of Columbus was spray-painted with the words “Hate will not be tolerated.” The hands were covered in red ink. (http://www.denverpost.com/2017/10/07/christopher-columbus-statue-police-guard)

Geez, I grew up knowing Columbus as a hero, the explorer who first discovered America! I remember celebrating Columbus Day, a federal holiday since 1937, in elementary school. We recounted the tales of his voyages to the New World … the three Spanish ships a-sailing in 1492 … the Pinta, the Santa Maria, and the Santa Clara, nicknamed the Niña.

And today … well, today we assail that tale, as we deconstruct a history that’s been told impartially and through the lens of white superiority and the so-called “Age of Exploration” and colonialism. Today, we hear a more complete history of discovered lands and people – but, just who discovered whom? It depends on who you ask! There are two points of view, at least, in every meeting and border crossing.

Now, thanks to historical records, scholars, and the lived experiences of our Indigenous Peoples, we have an opportunity to face uncomfortable truths about how our country was so-called “founded” and “settled.” We have an opportunity, for those of us of European heritage, to acknowledge where we have been complicit in or benefited from centuries of wrongdoing.

We know Christopher Columbus was an Italian explorer who set out to reach the East Indies by a western route. His voyages to the Americas were financed by the Spanish Crown, which was eager to enter and profit from the spice trade. We don’t always remember – at least I wasn’t taught – that Columbus had been a slave-trader for twelve years before his first voyage to the Americas when he landed in what is now Haiti and the Dominican Republic. During a time of economic competition, his real search was for gold but the bounty he claimed was in the number of Arawak people he “discovered,” captured and enslaved.

Scholar Roxanne Dunbar-Ortiz and journalist Dina Gilio-Whitaker report Columbus took ten to twenty-five captives to Europe from his first voyage, with only seven to eight surviving the trip (Dunbar-Ortiz, Gilio-Whitaker. “All the real Indians died off”: and 20 other myths about Native Americans. Boston: Beacon Press, 2016. p 26). In his second voyage, he returned with “seventeen heavily armed ships, attack dogs and more than twelve hundred men (26),” capturing fifteen hundred men, women and children. Of those, five hundred were sent back to Europe, though only three hundred survived. All told, over four voyages, “Columbus is thought to have enslaved five thousand Indigenous Peoples throughout his voyaging career (26)” – he holds a record for any one individual. Something else I never learned in school!

Columbus set up large estates on the islands and enslaved the Arawaks to extract gold; when gold was not found, he systematically killed them, and many were driven to “mass suicide and infanticide to escape the cruelty of the Spaniards (Dunbar-Ortiz 27).” Historian Howard Zinn writes, “In two years, through murder, mutilation and suicide, half of the two-hundred-fifty thousand Indians on Haiti were dead. By 1515, there were perhaps fifty thousand left…. By the year 1550, there were five hundred. A report of the year 1650 shows none of the original Arawaks or their descendants left on the island (27).”

That’s a pretty gruesome and savage account, in my opinion.
Hmmm…. I didn’t learn this in school either! This man’s a hero?
Just who wrote my history text-books?

Columbus wasn’t the only explorer of his times to venture forth and capture lands and peoples for European monarchs. He and others had the Catholic Church’s urging, if not blessing, to declare religious wars on nonbelievers and to seize their lands. The Church issued legally binding edicts, called “papal bulls,” that justified such practices and set forth specific orders. Three of the edicts from the 1400’s form what we know as the “Doctrine of Discovery.”

The first edict issued, in 1452, gave Portugal the authority to “reduce Muslims, pagans, and other nonbelievers to perpetual slavery and to seize their property, and … facilitated the Portuguese slave trade from West Africa (Dunbar-Ortiz 29).” A second, in 1454, granted Portugal a monopoly on the African slave trade. A third, issued in 1493 after Columbus’s first voyage, granted the newly “discovered” lands to Spain.

The Doctrine of Discovery reflects beliefs in manifest destiny and Christian imperialism that hark back to the mindset, language, and practices of the Crusades between the eleventh and thirteenth centuries. It is steeped in Christian superiority, especially of European white Christians, and is an early overtly racist document.

Now, hundreds of years later, we might consider this a closed case --- Columbus and other explorers have come and gone; and our churches don’t carry out Crusades of this type anymore, at least not to my knowledge. We can’t undo the past, we can’t bring back the lives that have been lost, we can’t undo most of the atrocities our Indigenous kin have suffered since Columbus’ days. We can agree that what’s past is past, right?

Email ThisBlogThis!Share to TwitterShare to FacebookShare to Pinterest
Labels: Davidson