As Unitarian Universalists, we are often called to minister to a weary and unjust world…. And we do rise to the call for justice!

Over the years, we have learned we do our best justice work when we leave behind any tendencies to swoop in as experts and try to fix things, and instead, we build relationships and partner with impacted communities.

We do this, in part, by centering the voices of those most marginalized and by flanking their leadership. We become allies, even accomplices, at times, for the good of all. The same is true as we work together to create climate justice.

Among the many on the frontlines of climate change and injustice are our children, youth and young adults. Because their physical presence, feelings, and energies are absent in today’s line-up of speakers and musicians, 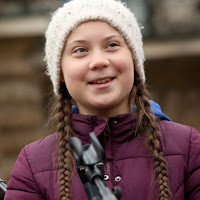 I want to at the least lift up the words of two young climate activists.

Greta Thunberg is a Swedish fifteen-year old who began in August 2018 to skip school on Fridays and sit outside the Swedish Parliament protesting their inaction on reducing carbon emissions. You may have heard she was nominated last week for the Nobel Peace Prize. She addressed leaders of the 2018 United Nations Climate Talks last December and the World Economic Forum in January. There, she said,

What began as her solitary action spawned a global movement: Fridays for the Future.
This past Friday, an estimated 1.4 million students skipped classes to attend 2,052 organized protests in 123 countries.

Columnist Rebecca Solnit, writing in The Guardian, recognized these climate strikers as “the force of possibility that runs through the present like a river through the desert.” 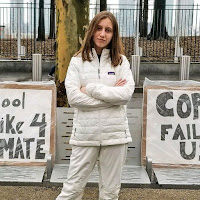 Thirteen-year-old Alexandria Villasenor is part of that force. She is a native of California whose family relocated to New York City so she could breathe more easily. She has followed in Greta’s footsteps and spent every Friday since December outside the UN headquarters protesting their inaction on climate change.

In a recent interview for The Nation, she said,


“It’s important to take action now, because we don’t have time left. By the time the youth are in positions of power, it’ll be too late to reverse climate change. We have to force politicians to start acting on climate change.”

When asked why she wasn’t in school, she replied,

She is one of three organizers of the US Youth Climate Strike and was, I imagine, among the many students in New York City on Friday protesting at schools, City Hall, and Columbus Circle, before staging a mass die-in on the steps of the American Museum of Natural History.

Would you, could you, do the same? How might you amplify this force of possibility, and step into the “present like a river through the (parched) desert?”

I encourage you to take more than just this moment and our time together today to reflect upon the fears and courage demanded of those whose future unfolds amidst such unimaginable change and uncertainty. We do owe them and all beings a livable climate.

As Greta Thunberg reminds us, “The one thing we need more than hope is action. Once we start to act, hope is everywhere.” So then, tell me, and tell the children, tell the youth, and tell the young adults, and tell each other – what actions do you intend to take in your one life to help build today’s movement and create climate justice?

For your acts are their hope today and for tomorrow’s tomorrow.

Rebecca Solnit: “Thank you, climate strikers. Your action matters and your power will be felt.”

“Why Go to School When You Have No Future?” A Q&A With a 13-year Old Climate Striker
Posted by Unknown at 3:20 PM